You may be here looking for answers as to who Friedrich Froebel was and what are Froebel’s gifts, and when looking for the right education, home learning format or curriculum for your child, there are so many options. Montessori, Waldorf and the lesser-known Froebel method. Let’s take a closer look at Froebel, the style of education offered by the Froebel method and also Froebel’s gifts.

Who was Friedrich Froebel?

Though not as well known as other early childhood education advocates such as Maria Montessori or Rudolf Steiner, Friedrich Froebel was the inventor of the kindergarten and his groundbreaking work changed the way we view early childhood. Froebel showed us the importance of play for helping children understand the world around them, and that childhood is so much more than just preparation for adulthood.

Born in 1782 in Germany, Froebel’s own difficult early years may have been what propelled him to be such an advocate for good early education and why the Froebel method places such importance on positive relationships and allowing children to express themselves and their feelings. His mother died when he was just 1 year old and following this, he was then rejected by his new stepmother once her own child arrived.

Froebel’s childhood was a lonely one. He spent much of his time alone in the parsonage garden of his stern pastor father. When he was 11 years old,  Froebel went to live with his much gentler uncle, who nurtured him and his love of nature and mathematics. Froebel went on to train in forestry, study mathematics at the University of Jena, and then became a curator of crystallography in Berlin.

Froebel became a teacher in 1805 at a secondary school in Frankfurt. While working at the school he learned about the revolutionary modern principles of education from Swiss pedagogue and educational reformer Johann Heinrich Pestalozzi. From 1808 to 1810 Froebel attended the training institute run by Johann Pestalozzi at Yverdon in Switzerland and further developed his own ideas on reforming education.

He opened his own school, orphanage and teacher training school in Burgdorf, Switzerland in 1831. In 1837 in Bad Blankenburg, Germany, Froebel founded the very first kindergarten or ‘garden of children’ – a garden specially designed to be the ideal environment for children’s play.

The Froebel method places great importance on play, learning through nature and self-expression for child development.

“Play is the highest expression of human development in childhood for it alone is the free expression of what is in the child’s soul.” – Friedrich Froebel

What are the principles of the Froebel Method?

The basic principles of the Froebel method: 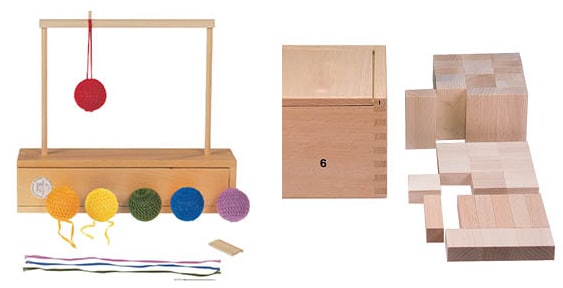 What are Froebel’s Gifts?

Friedrich Froebel spent a great deal of time observing children. He used his mathematical and scientific knowledge to develop a series of gifts and occupations or activities to promote childhood development. These ‘play gifts’ or Spielgaben work as a guideline for pre-school education.

Increasing in difficulty, Froebel’s gifts are designed to enable children to build their learning, skills and understanding through play and experimentation with familiar objects. Froebel’s Gifts included one of the very first sets of wooden building blocks to be developed specifically for young children to play, create and explore with.

Froebel’s gifts include sets of objects including cubes, spheres, cylinders and sticks and encourage creative play while incorporating aspects of learning including mathematics, science, engineering and architecture while children play.

Each gift in the sequence presents new learning and challenge levels, and all are open-ended and designed to support self-initiated play so the child can choose their own way to play and explore.

The first Gift, or Gabe, for example, consists of 6 soft rainbow coloured yarn balls to stimulate interaction and movement in babies and toddlers, developing motor skills, hand-eye coordination and perception as they hold, roll and throw the balls or watch them swing.

Gift 6 is more advanced – suitable for children from around the age of 5 – and contains 36 cuboids of different sizes to help develop mathematical skills such as sorting, counting and basic understanding of fractions as well as inviting the recreation of familiar buildings or free building blocks play.

Renowned German toy brand SINA Spielzeug is licensed to produce the Froebel Gaben and occupations according to the original blueprints from the 1800s.

How does the Froebel method differ from other pedagogies and can it be combined with other methods? 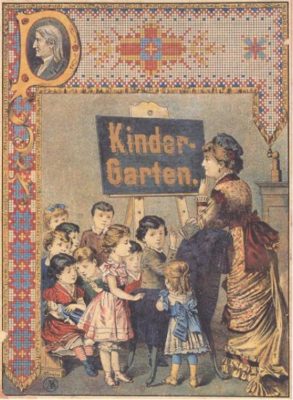 Froebel’s work influenced many early childhood education advocates including Maria Montessori and Rudolf Steiner and there are lots of parallels to be found between the Froebel method and both Montessori and Waldorf pedagogies.

The emphasis on learning being child-led and especially receptive periods of child development goes hand-in-hand with Montessori principles. The importance of engaging with nature, the creative exploration of feelings and nurturing the whole child resonates with Waldorf principles.

You may want to consider the Froebel method as an alternative education for your child, or you may want to take aspects of Froebel’s method that align with your values, priorities and parenting.

Exploring and learning through play, creativity, discovering for oneself how things work, self-directed activity and lots of movement are all extremely valuable attributes of education and create wonderful, positive learning experiences for children!

Sarah Varley is a freelance writer and mother of two from England. Sarah embraced the Montessori method for her children’s early education and is a huge fan of open-ended play with beautiful toys that last for generations. As a former Librarian, there will always be a special place in her heart for books, sorting and organising!